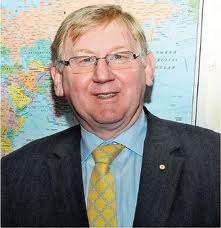 Today the Age reported that the Federal government has been spying on Green groups, particularly environmental activists peacefully protesting at coal-fired power stations and coal export facilities. Martin Ferguson, the member for Batman and Minister for Resources and Energy, requested the additional surveillance, prompted by lobbying by the coal energy companies.

These companies are largely foreign-owned. Over the next five years, foreign-owned mining companies will ship some $50 billion per annum offshore in dividends.

Not content with their campaign against a tax on their super profits, these vast corporations are now using their influence to have Australian authorities covertly spy on their political opponents - and they have a ready supporter in Martin Ferguson.

This surveillance of community groups is one-sided: it is not directed at companies who break the law. There is no surveillance of board rooms to find out what other plans they might have to use their resources to alter the political debate in Australia. Nor is it being used to detect breaches of environmental laws by these companies. It is directed against the very community which should be sovereign in a democratic system.


You won't be able to find out if your group or your emails have been spied on. This would be exempted from disclosure under s 37 of the Commonwealth Freedom of Information Act. This means that the community will not be able to challenge the use of these covert powers in any specific instance.

The latest news follows revelations in 2008 that police have been infiltrating community groups and spying on them.

Community participation is at the core of democracy. Once we allow our "security" forces to undermine the freedom to participate in public life we are on the slippery slope to a different kind of regime. As Benjamin Franklin put it:


They who can give up essential liberty to obtain a little temporary safety deserve neither liberty nor safety.

Today we need the voice of the community like never before: the corporations trying to protect their position are jeopardising the future of humanity - and the Earth itself - with their dig it up and burn it approach, and the community is our last best hope.

The chill effect on community participation where government agencies are spying on participants is well known and makes it so much harder to act against the big carbon economy.

For Martin Ferguson to be siding with big coal against the future of the planet is not surprising. It is consistent with his dreadful anti-environment record, including recently promoting the sale of uranium to India. And of course he's no stranger to protesters - because they have taken their campaigns right up to him. 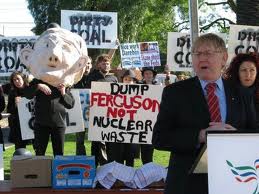 Spying on community groups is a hallmark of totalitarian regimes. It is an unaccountable use of power which undermines the foundation of democracy itself. Australia should not stand for it.