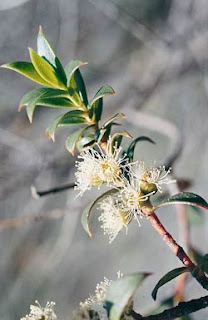 We keep discovering more about the Australian bush.

Once we had the tallest trees on Earth.  We have our Wollemi pines, survivors from the age of the dinosaurs, discovered in the 1990s to the astonishment of the world.

High on the slopes of Tasmania's Mount Read, beside the small glacial Lake Johnston, there is a patch of huon pine approximately 1 hectare in extent. At an altitude of 1000 metres, it is the highest occurrence of huon pine recorded.

In 1995 (the same year as the discovery of the wollemi pine), researchers were astonished to find not only that all the trees in this stand were male, but that DNA tests showed them to be genetically identical. They were clones of the one tree, evidently spreading as branches made contact with the soil and a fresh trunk sprouted. Huon pine pollen samples from Lake Johnston's sediments were dated at 10,500 years.

The oldest individual trunk in this colony may be 2000 years old, but the lonely male organism as a whole is in excess of 10,500 years old, probably having become established before the last glacial period, maybe as long ago as 30,000 years.

Perhaps the rarest eucalypt is Eucalyptus recurva - discovered in the 1980s and also known as the Ice Age Gum or the Mongarlowe Mallee. It is a mallee, with many stems sprouting from a single lignotuber (underground root ball).

The species is known from only four sites on the southern tablelands of NSW - three of the sites having just a single individual, and the other having two. Some of these five individuals are genetically identical.

The oldest of these plants, near Windellama, south east of Goulburn, is considered to be 13,000 years old and a relic of the ice age. It is possibly the oldest plant on Earth.

Because of the plant's extreme rarity, the exact locations of each known specimen is a closely guarded secret - although all are on private property.

Another particularly rare mallee - this time in Western Australia - is the Meelup Mallee (Eucalyptus phylacis). It was also discovered in the 1980s and is currently known from a single clonal population comprising 27 genetically identical individuals over a range of .09 hectares in the Shire of Busselton. The distance between the ramets (i.e. clonal individuals) suggests that this plant is also very old, and the estimate is between 6,380 years and 6,660 years. Its lignotuber extends for some 40 metres.

Eucalypts are difficult to classify. Species seem to blend into each other, and often different species can appear quite similar, and the same species can have very different appearances. Scientists now recognise three distinct genera of eucalypts: Angophora, Corymbia and Eucalyptus.

There have been many new species of eucalypt described to science in recent years, such as the Wollemi stringybark (as distinct from the pine), named in 2011, or the two species of eucalypt from northern NSW first described to science in 1999 - Eucalyptus quinniorum and E. oresbia, just two years after five new species were discovered in the same State. In 2001 a further species was discovered in NSW - E. boliviana - confined to a small stand near the crest of a single hill.

In 2009 scientists at Kew Gardens in London announced they had identified two new species of eucalypt from Western Australia. And more seem to be discovered all the time.

Often these new species are identified in small, isolated clumps of trees. Historically, and into the present day, many such clumps have been routinely cleared or logged, and in the process we have lost unguessed riches from our land's biodiversity.

We whitefellas are newcomers to this land, and have not yet learned all that it has to offer. The rare and wonderful secrets it is gradually revealing encourage us to treat it with profound respect.