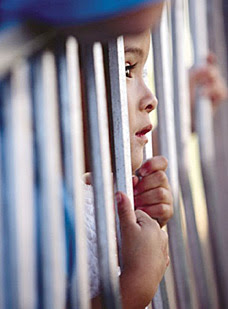 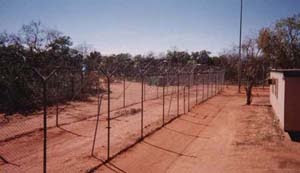 Curtin Detention Centre - recently reopened. The buildings are not insulated. This photo was taken by an asylum seeker.
The government has been framing the debate about asylum seekers in the language of "border protection".
We delineate boundaries over land (and sea) to divide jurisdiction, and people cross those borders all the time.
The act of crossing a border does not violate it. When someone seeks the protection of our jurisdiction, they generally have to cross over the border to obtain the protection of that jurisdiction. There is no need to protect our borders from such people - they are relying on those borders, not threatening them.
That is what seeking asylum means - asking for our help.
If an army were to cross the border, with the object of overthrowing the government, that would be a different matter. To suggest that people fleeing persecution, and seeking sanctuary here, are to be categorized in such a way, is to leave the path of reason.
Australia was instrumental in developing the Refugee Convention in 1951. This was a response to the denial of asylum to Jewish refugees - notably aboard the St Louis in its doomed attempt to take threatened Jews out of Nazi Germany in 1939. We are signatories to the convention.
This week Julia Gillard will make an announcement about "border protection" because the three month suspension of Tamil claims for asylum will expire. Her use of the term "border protection" already shows us how she views this issue.
The right of Tamils (and Afghans) to claim asylum should never have been suspended. In fact, it is clear that the situation for Tamils in Sri Lanka remains dire, and many will be able to show a "well-founded fear of persecution". In Afghanistan, the UN has pulled all its personnel out because it is unsafe.
When there is hysteria about an issue, governments can exploit it for short term political gain, but they do damage to our nation in the process. Their real responsibility is to articulate the values to which we aspire, and to take leadership. Regrettably, that has not happened under Prime Ministers Rudd or Gillard.
The debate about asylum seekers in Australia is fundamentally about ourselves. It's about what sort of community we are and what sort of nation we are. We proclaim our values of freedom and justice, but when people fleeing unimaginable persecution take us at our word, and look to us for help, we lock them up in desert hell holes and we deny them the processes of our law.
Is this who we really are? Is this the legacy we want to leave?
External Links
Posted by Brian Walters at 17:29