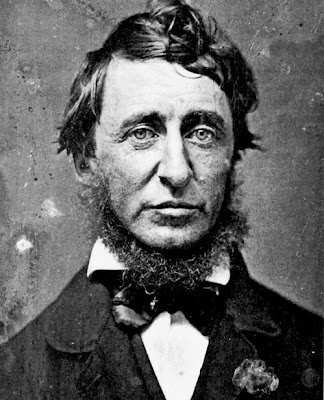 Henry David Thoreau
The writings of Henry David Thoreau (1817 - 1862) have been a major inspiration for the world wide Green movement. This week (on 6 May) sees the anniversary of his death at the comparatively young age of 44.
Famously, Thoreau was jailed for refusing to pay taxes that might be used to fund the Mexican war. His treatise "Civil Disobedience" grew from this experience, and was an important influence on both Mahatma Gandhi and Martin Luther King Jr. Non violent protest action today traces its roots to Thoreau's writings, and the worldwide peace movement also looks to his voice of passionate integrity. 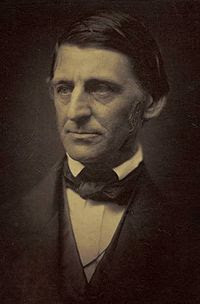 Ralph Waldo Emerson
Walden
In 1844, Ralph Waldo Emerson bought 14 acres of woods at Walden Pond, near Concord, Massachusetts. The following year, his friend Thoreau, just 27 years old, having been dismissed as a teacher because he refused to administer corporal punishment, moved there and built a small cottage to live in.

Thoreau wished to engage in an experiment of “simple living”, and he remained at Walden for two years.

He lived alone at Walden, but not as a hermit. Amongst his regular visitors were several famous writers, including the Emerson family, the Alcotts, and the Hawthornes. He wrote of the “regular salutes of laughter” in his home when his friend the poet Ellery Channing visited.

Thoreau explained he went into the woods "to suck the marrow out of life."

I went to the woods because I wished to live deliberately, to front only the essential facts of life, and see if I could not learn what it had to teach, and not, when I came to die, discover that I had not lived.

While at Walden, Thoreau wrote several of his best remembered works, including the first draft of his masterpiece Walden. He wrote: “It is the sum of all wisdom not to do desperate things. The great mass of mankind lead lives of quiet desperation.” Walden
Thoreau ranges far and wide in Walden, much as a modern blog might. It is often quoted. You may have heard, for example: "Beware of all enterprises that require new clothes," and "In wildness is the preservation of the world," or "What is the use of a house if you haven't got a tolerable planet to put it on?"
He is not afraid to question conventional wisdom, and frequently reaches heights of inspiration. Near the end of the book, he discusses what he has learnt from his time in the woods:

The surface of the earth is soft and impressible by the feet of men; and so with the paths that the mind travels. How worn and dusty, then, must be the highways of the world, how deep the ruts of tradition and conformity! I did not wish to take a cabin passage, but rather to go before the mast and on the deck of the world, for there I could best see the moonlight amid the mountains. I do not wish to go below now.

I learned this, at least, by my experiment, that if one advances confidently in the direction of his dreams, and endeavours to live the life which he has imagined, he will meet with a success unexpected in common hours. He will put some things behind, will pass an invisible boundary; new, universal, and more liberal laws will begin to establish themselves around and within him; or the old laws be expanded, and interpreted in his favour in a more liberal sense, and he will live with the license of a higher order of beings. In proportion as he simplifies his life, the laws of the universe will appear less complex, and solitude will not be solitude, nor poverty poverty, nor weakness weakness. If you have built castles in the air, your work need not be lost; that is where they should be. Now put the foundations under them.