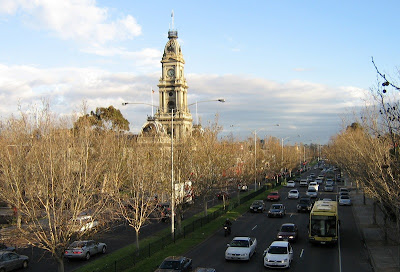 Hoddle Street beside Collingwood Town Hall
- just the other side of the Town Hall runs the Hurstbridge/Epping rail line
Each morning Hoddle Street is choked with traffic. The government has committed to a $5 million study “to investigate ways to improve the efficiency and reliability of all modes of transport along and across Hoddle Street from Eastern Freeway to just north of the M1 Freeway”.
Although the proposal is to improve "all modes of transport" the study is being conducted by VicRoads. The focus on Hoddle Street, separate from the other major transport routes with which it interrelates, suggests there will be a focus on cars and roads, rather than, for example, trains.
Close examination of the Project Description, which forms part of the Hoddle Street Study Scope document (downloadable from the home page of the Study) shows that the real purpose of this study is nothing other than roadworks. It is an engineering study to best carry out "grade separation" (ie flyovers and tunnels) along Hoddle Street:
Grade separating some of these junctions has the potential to improve the operation of Melbourne's central road system for cars, trams, buses and commercial vehicles.
The Government will allocate $5 million to commence engineering investigations to determine the feasibility of grade separating key junctions on Hoddle Street. A key element in these investigations will be to assess how disruption to traffic could best bee minimised during any construction works.
Rail will not be considered. Nor any other more imaginative options. It's just lots of road building. Disruption "to traffic" will be considered, but not to residents or parklands.
Each morning at peak hour Hoddle Street carries in total some 8000 vehicles. There is an average of 1.1 people per vehicle. Most of the traffic is heading into the city.
The best capacity roads can achieve is about 700 cars per hour per lane. Hoddle Street is already very close to that level of use, so the benefit from expensive grade separation is necessarily minimal.
Let's take a look at how people move in the area during the mornings at present: 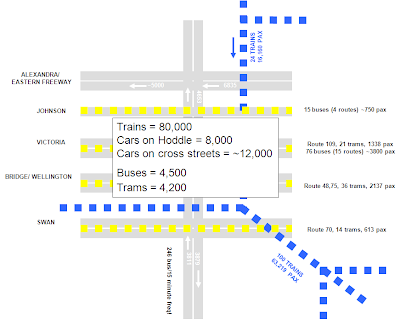 People movement in Hoddle Street area
In addition to the 8000 cars along Hoddle Street, there are about 12,000 cars going along the cross streets. Along the cross streets, buses move about 4500 people at present. Trams move about 4200 people.
But the big people mover is rail. Trains in the vicinity of Hoddle Street move 80,000 people each morning. Whilst the cars sit in their traffic jams, fully loaded trains whisk by.
The train system has a lot of room for more efficiency - more frequent trains would get many more people into the city in less time. Those who have to travel by car would do so more easily.
Hoddle Street is crowded because cars are such an inefficient way to move people in numbers. The billions of dollars in upgrading Hoddle Street would be better spent upgrading the rail system.
And that's even before we've talked about peak oil or carbon emissions - or bicycles.
Residents certainly don't want this Hoddle Highway white elephant. It will mean using Yarra Park as a construction site for years, and major disruption to the local area. The Greens held a public meeting in the East Melbourne Library last week, with numbers overflowing the venue. The opposition was unanimous, well-informed and passionate.
We want imaginative solutions that deal with the real transport needs of Melbourne. The Greens' People Plan is a great start.
External Links
The People Plan
Kathleen Maltzahn's account of the Greens' East Melbourne public meeting
Hoddle Street Study
Posted by Brian Walters at 13:47