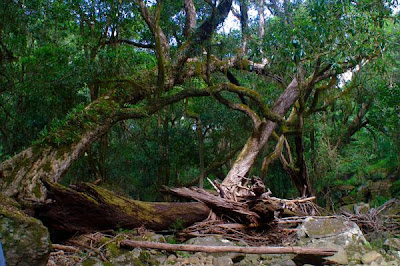 Rainforest at the Mitchell - photos by Robert Merkel at Larvatus Prodeo
I've just spent Easter at the Mitchell River - camping with three other families as we do each year. It is a very special time at a very special place.
In the whole of southern mainland Australia, there is only one major river not dammed anywhere along its length - Gippsland's Mitchell River. Eight rivers contribute to the Mitchell's flow, and it runs through a magnificent gorge before flowing out onto the rich river flats near Bairnsdale. The gorge and surrounding areas are now protected in the Mitchell River National Park.
The Mitchell has patches of rainforest, giant kanooka trees, and plenty of rapids for canoeists. It has many spectacular features, including the cliffline of the Amphitheatre and the numerous magic tributaries - all different - that flow into the gorge. The rich wildlife of the Mitchell includes kangaroos, emus and goannas. Koalas were once common but now are gone. There are some introduced animals - notably goats and deer. The birdlife is varied: last Monday we saw lyre birds, and also six cormorants drying their wings at the mystically beautiful pool where we swim.
In the 1870s gold prospectors dotted each bend along the river, and the packhorse supply trail now forms a wonderful walking track between Angusvale in the north and the Den of Nargun in the south.
In 1890 there was an attempt to dam the Mitchell near Glenaladale, but the structure was badly damaged in a flood before it could be completed, and the works were abandoned. The large unfinished stone walls still sit there with a gaping hole between them, and a powerful rapid formed by the shaped blocks which fell into the water.
In 1980 the Hamer government decided to dam the river at Angusvale, and built an expensively engineered road to cope with the heavy traffic. On its election in 1982, the Cain government opted to "defer indefinitely" the construction of the dam.
Today there are rumblings from Andrew Bolt and even some coalition politicians that damming the Mitchell would be a good idea - although why this is so when we can't find enough water to fill the dams we already have, who can say.
The Mitchell River is a precious legacy, and we should let it run free. The Mitchell River near the Den of Nargun
Posted by Brian Walters at 22:27