Why are we logging our water catchments? Forest in the O'Shannessy catchment

Melbourne’s water supply is seriously compromised by the continued logging in Melbourne’s water catchments. At a time of water shortage, this cannot be justified.
Once, our water catchments were sacrosanct – and the public are still excluded. However, for the past 30 years, loggers have been permitted into our water catchments.
Around 12% of Melbourne’s total forest catchment is available for logging. 340 hectares can be harvested each year – approximately 170 MCGs.
Clearfelling occurs in five catchments which supply approximately 40% of Melbourne’s water needs.
The logging of native forest has a marked and well-documented impact on the water yield from the forest logged. As new growth establishes itself on the logged landscape, the new plants transpire much more water, and this reduces yield from the logged area. Yield drops to about 50 % of what it was, and it takes up to 200 years for the water yield to reach its former levels. In the meantime enormous quantities of water are lost.
As Vertessy, Watson and O’Sullivan (all attached to the Cooperative Research Centre for Catchment Hydrology in Canberra, but also respectively from the CSIRO, California State University and Monash University) express it in their 2001 study:
There is a well-documented empirical relationship between stand age and water yield for mountain ash (Eucalyptus regnans) forested catchments in the Central Highlands of Victoria, Australia. Catchments covered with old-growth stands of mountain ash yield almost twice the amount of water annually as those covered with re-growth stands aged 25 years.
Set out below is the well-known Kuczera curve which shows the position graphically. 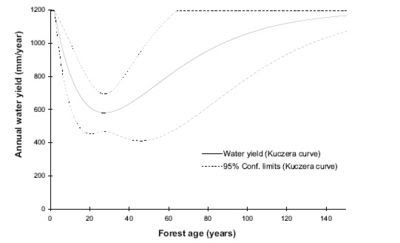 Once the mature forest is logged, the water yield drops by up to 50%, only returning to normal after an average of 150 years - and up to 200 years.
There are no generally accepted figures for the amount of water we currently lose from past logging in our catchments. However, stopping logging now will save us at least 15 gigalitres of water per annum between now and 2050, or enough water to fill 6000 Olympic-sized swimming pools every year.
Twelve Melbourne councils have now passed motions calling for logging of our catchments to stop.
The timber on this public land belongs to the public, but the royalties received do not cover the costs of facilitating the logging: we are effectively subsidising the destruction of these forests.
There is no sound policy reason for continuing to log Melbourne’s water catchments: it makes neither economic nor environmental sense.
Logging of Melbourne’s water catchments should end immediately. No consideration should have been given to the north south pipeline or the desalination plant while we continue to compromise the primary source of Melbourne’s water.
External Links
Research results for "Wood and Water" project
Greenlivingpedia
Victorian Rainforest Network
The Wilderness Society
Posted by Brian Walters at 13:38