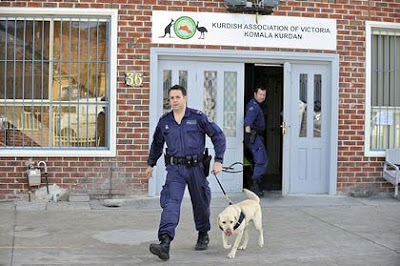 Police have raided Kurdish groups across Australia. In what appears to be a re-run of the farcical and highly embarrassing Tamil terror trial, the current allegations against the Kurdish community are that they "funnelled as much as $1 million to the Turkish separatist group, the Kurdistan Workers Party (PKK)".

The power to ban organisations as "terrorist" is a key plank of the repressive terror laws passed over recent years.

In the 1950s there was a protracted national debate over whether the Communist Party would be banned. Prominent people from all political persuasions argued against this – not to defend communism, but to defend our own traditions of political debate. In the end, after the High Court had struck down the legislation, the subsequent referendum to ban the Communist Party failed.

Today, however, we have reached the point, with remarkably little discussion, where the Attorney-General of the day - a politician - can ban a political party as terrorist with very little opportunity for judicial oversight of that decision.

On 15 December 2005, a week after the Turkish Prime Minister Recep Erdoğan visited Australia, the then Attorney-General, Mr Ruddock, listed the PKK – the Kurdish Workers Party - as a terrorist organisation.

In his media release announcing the decision, Mr Ruddock said:

But there has never been any suggestion that the PKK threatens the safety and security of Australia or Australians.

The PKK has been involved in an internal armed conflict with Turkey since the 1980s. There is fault on both sides. Human Rights Watch has certainly criticised both sides.

The proscription power is supposed to be in aid of preventing politically motivated violence - particularly in Australia - but instead it has been used to aid a government which is engaged in political conflict with the Kurdish minority.

For Australian Kurdish refugees who fled political persecution for their PKK allegiances, or who where imputed to be PKK sympathizers by the Turkish government, proscription presents specific dangers. They are open to prosecution for the same reasons they were granted asylum – supporting the PKK.

And under these bizarre terror laws, a commitment to non-violence would be no defence.

No one can in practice challenge the proscription in court. To do so the Kurdish groups in question would have to state that they were affected because they were aligned to the PKK - thus exposing themselves to prosecution.

Senator Bob Brown moved in August 2006 a motion to disallow the listing of the PKK. Labor senators voted with the coalition in support of Mr Ruddock's listing. The listing undermines negotiations for peace, and criminalizes any Australian dialogue with the PKK on solutions for the resolution of conflict.

In Turkey, the political party representing the Kurds has been banned, the human rights activist acting for repressed Kurds has been arrested, and there has been a string of incidents involving police shootings and violence.

Once again our own security services are being used to aid a repressive foreign regime with a ghastly human rights record. In the name of fighting terrorism, we have allied ourselves with injustice.