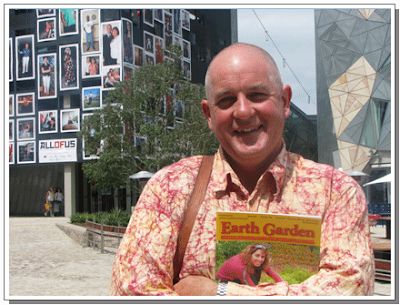 Alan Gray
My journey in relation to SLAPP suits began in 1999 when my friend Alan Gray rang me. It was the Thursday before Easter, and I was about to go on holidays. I could hear the fear in his voice. He sounded devastated. “Brian,” he said, “I’m not feeling good – all I have worked to build for my family – my house and my business – could go down the drain.”
Alan was then, and still is, the editor of Earth Garden magazine. He had written a book called “Forest-Friendly Building Timbers”. It was a consumers' guide to the ethical purchase of timber for various building needs - timber not sourced from native forests. BBC Hardware had agreed to stock the book throughout Australia.
Just before the close of business for the Easter holidays, when Alan was in Sydney for a launch of the book, the solicitors for the National Association of Forest Industries sent him a letter threatening to take him to court for deceptive and misleading conduct under the Trade Practices Act, because the book made a number of statements about the logging industry which they disputed.
The statements were all sourced and quoted from government reports. They were indisputable. And there were good statutory defences under the TPA anyway. But this would not matter – Alan Gray could not afford to bankrupt himself in order to prove he was right. Even a few days in court would be crippling.
NAFI demanded the shredding of all copies of the book, and an undertaking not to repeat any of these statements. Otherwise, off to the Federal Court. Alan, unable to face the prospect of even a short Federal Court hearing, was at the point of capitulation.
The irony was that the Trade Practices Act is meant to be about consumer protection, and the logging industry wanted to keep information from consumers to protect its own interests.
It was the modern equivalent of a mediaeval book burning.
I arranged for Alan to send the letter and the book immediately so I could look over them.
I rang back. Sometimes you have to have the courage of your convictions when you give legal advice. I said to him that he should not worry: the letter meant the book would enjoy greatly increased sales. We prepared a legal reply telling NAFI to "go jump" and then sent the correspondence to every journalist we could think of.
It got a run in every paper, and in many cases on the front page. Terry Lane on Radio National's "National Interest" interviewed Professor Allan Fels (head of ACCC) who offered the opinion that the NAFI letter itself may well amount to deceptive and misleading conduct, because anyone who knew the workings of the TPA would know that the threat they made was empty.
We dared NAFI to bring proceedings. They didn’t. The book was at the top of the non-fiction best seller list for months.
There was one dark aspect of the outcome. BBC Hardwares issued a press release which said:
BBC Hardware Limited today withdrew from sale in its stores a booklet titled “Forest-Friendly Building Timbers”.
This follows a threat of legal action against BBC Hardware by the National Association of Forest Industries, which took exception to the publication.[1]
NAFI’s threat of legal action was baseless. They did not even issue any proceedings. But still their threat pushed “Forest-Friendly Building Timbers” off the shelves of the major hardware chain which had supported it.
It’s a good example of the way some big business operators misuse the court system – frequently without even having to take proceedings. In this case we called their bluff, and that’s a good lesson in how to deal with SLAPP suits – stick together, go public, and don’t let them get away with it.
[1] BBC Hardware Media Statement 8 April 1999
External Links
Posted by Brian Walters at 21:19