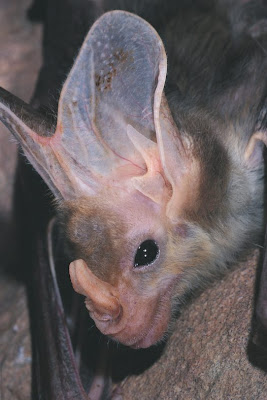 In Queensland, north of Rockhampton, there is a mountain named after the famous Sicilian volcano - Mount Etna. It looks a little like Mount Etna in shape.

The area around is rich in limestone, and these have many caves. Apart from being very beautiful, the caves contain breeding habitat for several species of bat, including the ghost bat, which is unique to Australasia and listed as vulnerable. It is Australia’s only carnivorous bat and the second largest such bat in the world. It has the most sensitive hearing of any land mammal, and has been the subject of specialist hearing research.

One cave, Speaking Tube, was considered critical to the habitat of the ghost bats in the area.

In the 1980s, Central Queensland Cement was mining limestone at Mt Etna, which was in a public reserve. Conservationists obtained legal advice that the mining contravened several laws.

When the Company announced that it would blast Speaking Tube, protesters occupied the cave, but CQC lowered in speakers playing high-pitched sirens. The international community called for an end to the mining of the cave.

After some damage was already done, the Central Queensland Speleological Association sought injunctions in the Queensland Supreme Court.

The court found that the speleologists lacked "standing". In other words, the court said that because they would not be economically affected, they had no right to take legal action at all. For this reason, the court did not grant injunctions pending the full hearing. More importantly, it ordered that the speleologists deposit $15,000 for security for costs in respect of the balance of the action – that is, the speleologists had to put up money for Queensland Cement’s costs, in case they lost their case.

After a series of further hearings dealing with procedural issues (including visits to the High Court) Justice De Jersey ordered the speleologists to give further security in the sum of $45,000 within a fortnight, failing which, the case would be struck out - and the company would blast Speaking Tube.

The speleologists embarked on a fundraising campaign. They raised $20,000, and had the balance guaranteed by a Brisbane woman.

However, it then became clear that if they deposited the $45,000, the speleologists would be met with a further application for yet more security for costs. They knew they would not be able to raise this, and then they would lose the $45,000.

The speleologists abandoned their action.

The manager of Central Queensland Cement had admitted that the limestone around Speaking Tube would not be needed for ten years. Nevertheless, the following morning, 12 June 1989, a screen of trucks was placed in front of the cave in a vain bid to block the view of waiting television cameras. The company then dynamited Speaking Tube out of existence.

Despite several court hearings, the cave was destroyed without the legality of the mining ever being determined. The speleologists were acting not out of self-interest, but in the public interest, and they should not have faced costs penalties at all.
We'll never get Speaking Tube cave back, but perhaps we can use the experience to ensure we have a legal system more responsive to important conservation concerns - and astute to actually hear the merits of those claims. Security for costs is a major barrier to bringing legal proceedings in the public interest. Where community and environment groups approach the court in the public interest, they should be able to obtain, in advance, an assurance that they will not be liable for costs.
External Links
Posted by Brian Walters at 22:22