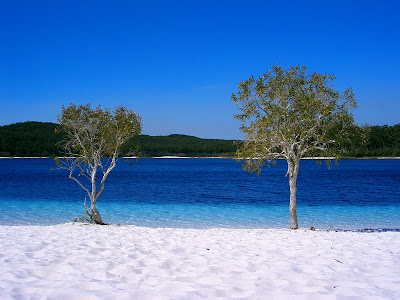 John Sinclair was named Australian of the Year in 1976. He grew up in Maryborough in Queensland. He had studied agriculture and had been a district organiser for the Young Farmers. Having qualified at night school, he worked as a teacher with the Queensland Education Department.

Sinclair had heard about Fraser Island from his parents, who honeymooned there, and when he visited the place, it fulfilled his "almost mythical" expectations.

John became the driving force behind the Fraser Island Defenders Organisation. Without FIDO, Fraser Island would have been logged and mined to the point where it lost most of its natural values. FIDO is responsible for its status as a national park. The story of the Fraser Island campaign is one of tenacity and ingenuity - and injustice.

During the course of the campaign, in which not only the mining industry but also the Bjelke-Petersen government attacked him relentlessly, John Sinclair’s wife received threatening phone calls. His children had the tyres on their bikes slashed. He himself was booed when he led his scout troop into the arena at the Maryborough Show.

In the Queensland Parliament Sinclair was repeatedly vilified by National Party MPs with false and scandalous allegations – for which he was given no right of reply.

The Education Department moved him without warning from Maryborough to a specially created post in Brisbane, and then, again with no warning, to Ipswich.

At the height of the controversy, Sinclair published in his newsletter the submission he had made to the Commonwealth’s Commission of Inquiry into Fraser Island mining. In it, he attacked the mining company Murphyores for “corruptly obtaining its leases and licences”. The Murphyores company.sued him for defamation.

But now Murphyores sued John Sinclair personally, and others with him. He was under immense pressure to do something to relieve the burden from others – particularly the Hervey Bay Publishing Company, the small business which printed FIDO’s newsletter. Eventually, three days before the hearing, he caved in, apologised, and paid out a significant but undisclosed sum to Murphyores.

Then the Education Department sent him on another sequence of unsolicited transfers and he resigned, abandoning $250,000 in superannuation. His family life in tatters, and having filed for bankruptcy, he moved to Sydney, where he was unemployed for six months, a refugee from a State whose heritage at Fraser Island and Cooloola he had done so much to protect.

Today Fraser Island is world heritage listed and a mecca for people all around the world – a wonderful resource for refreshment and inspiration. It would have been lost to Queensland and to the world if not for FIDO. And yet the legal system did not protect those who spoke out to make the world a better place, and the cost to John Sinclair – the Australian of the year – diminished all of Australia.