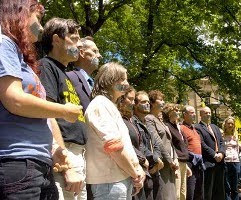 The Gunns 20 in Hobart
In mid 2004 I had lunch with Bob Brown to discuss some legal issues, and I gave him a copy of my book "Slapping on the Writs" about the use of strategic litigation to silence community groups.
On 13th December 2004 I was on my way up to Brisbane with my family for my niece's wedding. Our first night's stay was to be at Dubbo. I was just starting to unwind after a long drive, when I turned on my phone. It lit up with missed calls.
Then it rang: it was Bob Brown's adviser Marg Blakers. Had I heard the news? Australia’s biggest woodchipper and Tasmania’s largest company, Gunns Ltd, had just issued a writ out of the Supreme Court of Victoria against 20 (mostly Tasmanian) environmentalists, including Senator Bob Brown and the Wilderness Society. The writ claimed damages of more than $6 million for “corporate vilification” and “conspiracy to injure by unlawful means”.
I did some media interviews that night, and I'm sure I annoyed my family on that trip with long calls about strategy to various people whenever we were in mobile phone range.
My friend Dr Suresh Pathy, an anaesthetist, rang me when we were somewhere near Armidale. He was the secretary of Doctors for Native Forests - a Victorian group, and the twentieth Defendant: "They've got the wrong party!" he said. "We don't operate in Tasmania. The 19th Defendant is supposed to have said something on our behalf, but we don't know him. He's not part of our group, and he wasn't speaking for us."
In Tasmania, there is another group called "Doctors for Forests" which operates in Tasmania - there are no formal links between the two groups.
On 15th December 2004, two days after the writ was served, Gunns announced that it intended to build a large pulp mill in the Tamar valley. The reason for the issue of the writ now became obvious: it was intended to distract and silence opponents to its project.
The "Gunns 2o" as Bob Brown called the defendants, stood together in Hobart with tape over their mouths to symbolize the attempt to silence them. Many knew they stood to lose their homes from this litigation, and were in deep distress.
In due course I was briefed, along with Noel Russell, to act for Doctors for Native Forests. Vanessa Bleyer was our instructing solicitor.
The writ was extremely lengthy (227 pages). In the "Statement of Claim" which set out its allegations in detail, Gunns took exception, amongst other things, to conservationists’ correspondence with the Japanese buyers of Gunns’ woodchips in which they were asked to “review and cease … sourcing of native woodchips from Tasmania”. There was a complaint that representations were made to the Banksia environmental awards to oppose Gunns being included as a finalist. There were many complaints about public statements by opponents to logging.
All these actions of engaged citizens participating in the decisions that affected them were labelled conspiracy - it was a neat trick, redefining democracy as "conspiracy".
The statement of claim was bizarre, and included completely novel causes of action.
We wrote to EMA Legal, the solicitors for Gunns, and told them they had sued the wrong party.
Eventually a lengthy reply came, denying any mistake, and demanding damages and referring to a private email Suresh Pathy had sent to members of the group.
We asked them to pay half our costs to date, and gave them 7 days to think about it.
The first question to ask yourself about a statement of claim is: "Can I understand it? Do I know what the allegations are?"
It did not take long, looking at this convoluted and confused document, to realize that we had no hope of mastering what the case was against our client - Doctors for Native Forests - and we did not think any other defendant would be in any better position.
A team of counsel assembled to defend the writ. Most other counsel in the case were at first reluctant to take the step of applying to have the Statement of Claim struck out. In a long meeting in the chambers of Mark Dreyfus, Noel and I finally prevailed, and it was agreed by (most) other counsel to join us in the application to strike out the pleading.
The hearing was listed for 4th July 2005 - a Monday. After 5 pm on Friday 1st July (the last business day before the hearing) Gunns served us with a proposed amended Statement of Claim. This time it was 360 pages long, and even more complex.
Gunns expected us to seek an adjournment. They wanted to keep the bird aloft a bit longer, even though it didn't have a feather to fly with.
All weekend, to all hours, we worked on mastering the new document.
On the Monday morning counsel for Gunns announced that there would be yet further amendments, by way of "particulars" (this is where more detail is provided of specific allegations), and said that the material ought to be considered as a whole. He did not make clear what he was asking for but after ten pages of transcript the judge asked:

So you're seeking an adjournment effectively of today's application?

In a long answer, counsel for Gunns eventually conceded that he was. Counsel for the defendants opposed the adjournment, pointing out that we had been asking for particulars for months and had effectively received nothing, and did not expect anything further now.
The adjournment was refused.
We then argued the case for the remainder of the week. On 18th July the judge delivered his damming assessment of the Gunns writ - in both forms. It was struck out. The judge described it as "embarrassing", "confusing", "complex" and "unintelligible".
A third Statement of Claim was then delivered some months later. Again, we applied to have it struck out, and again the judge threw it out with a damning assessment.
The Gunns case was now in serious trouble. The adverse publicity had seen the Gunns share price plummet. Gunns sacked its lawyers and hired a new team.
At this point Gunns dropped the case against Doctors for Native Forests, and agreed to pay all costs.
The case then collapsed against a number of other defendants, including Bob Brown, and bit by bit the Gunns litigation unravelled.
Finally, on 1st February 2010, Gunns abandoned the case against the remaining four defendants, and agreed to pay them over $150,ooo in costs.
Gunns ended up paying several millions of dollars in costs to the defendants, to say nothing of what it paid to its own lawyers. But for many of the defendants it was an immense strain, imposing real financial and personal costs - just because they had stood up to a powerful company.
The Gunns litigation was a try on by well resourced plaintiffs who were determined to tie up their political enemies in court for as long as possible and as expensively as possible.
Litigation like this brings our legal system into disrepute, and should be outlawed by legislation.
External links
Posted by Brian Walters at 16:49