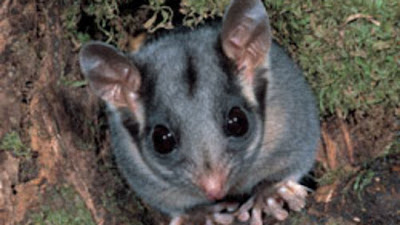 The endangered Leadbeater's possum - Victoria's faunal emblem
Australia's largest logging company, Gunns Ltd, has announced that it will get out of native forest logging in Australia.

CEO Greg L'Estrange said at a conference in Melbourne in Thursday "Native forest is not part of our future."
The reasons he gave were telling:

We see that the conflict largely has to end. Our employees and the communities we operate in have been collateral damage to this process. We want to move our business to a plantation-based business. The vast support of the Australian population is with the environmental non-government organisations.

This is a huge win for the environment.
The Gunns commitment is not only for Tasmania, but for the whole of Australia.
Here in Victoria, Gunns have been the biggest player in native forest logging ever since they took over Neville Smith Timber a few years ago.
Native forest logging employs only a few hundred people, and since there is a labour shortage in the plantation sector, those jobs can be absorbed there.
The industry has not been driven by sawlog production for years, and according to ABARE figures, plantations produce three times the volume of sawlogs as native forest - and rising.
The industry is booming - in plantations. And there is no shortage of timber at all - in plantations.
There is no part of a house that must be built with native forest timber.
The plantation sector must compete with the government sector. Native forest loggers do not have to buy the land, do not have to grow the trees, do not have to pay rates, do not have to pay land tax, do not have to build access roads - do not have to pay for any of the normal commercial infrastructure their enterprise uses. This means that the Victorians who own the trees are giving them away at subsidized prices.
Following the decision in the Brown Mountain case, it is clear that Vicforests has not been doing its job of protecting high conservation value forests. They do not deserve any further chance.
We know that logging causes massive loss of water and massive carbon pollution, and we know that logging increases fire risk because the regrowth is drier and more fire prone.
So now it's time for native forest to end in Victoria once and for all. The industry should be restructured so that it moves out of publicly owned native forest immediately and relies solely on the huge plantation resource.
External links
Posted by Brian Walters at 16:13