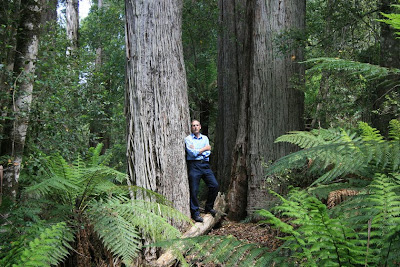 Just after Bob Brown was elected a Senator in 1996, I walked out of court at lunchtime. I was in Hobart, prosecuting orange roughy fishermen for fraudulently understating their catch.
I turned on my mobile and it rang. It was Margaret Blakers, Bob Brown’s personal assistant. She told me Bob had just been charged with obstructing lawful forest operations at Goolengook forest in East Gippsland.
As it happened, I already knew that, because his photo was all over the front page of the papers that morning.
Now it was for me to act for him.
The first concern was the prospect that if he was convicted of any serious offence, he might be disqualified from taking his seat in the senate. When I later met with Bob and his advisers, there was discussion about how the court case could be used to highlight the plight of the forests, but I had a different perspective: the way to get good publicity was to win the case, and I thought we could.
I had a good team, with fellow barristers Klaus Mueller and Brad Baker, and some diligent instructing solicitors, including Bill Coady and Bill Lambros.
Goolengook was spectacular forest, and had been the site of a long running logging blockade.
The charge was obstructing lawful forest operations. In fact, there was no logging occurring at the time, and nothing to obstruct. But more importantly, the prosecution would have to prove that the logging was lawful, and I was not sure that it was: the logging on which the police relied was carried out next to the Goolengook River - listed as a heritage river under the Heritage Rivers Act.
The Heritage Rivers Act recognised the Goolengook River as having the best continuum of rainforest in Victoria, and made logging unlawful in the area it had protected. That area was defined by reference to a map. We had to go to the Surveyor-General's office to obtain a copy of the map which was referred to in the Act.
Looking at the map, and looking at the logging coupe plans, one thing leapt out at me: the Act required that there be 200 metre buffer zone either side of the river, but the coupe plan purported to allow logging to within 100 metres of the river.
The logging was in breach of the Heritage Rivers Act, and Parliament had set out in the Heritage Rivers Act (s 15 of the Act at that time) that the Act was to prevail over other Acts, and any instrument (ie document) authorising a contravention of the Heritage Rivers Act was "void".
In due course we travelled to Moe Court to defend Bob Brown and two others who had been charged with him. The fate of several hundred other protesters - who had also been charged - would depend on this case.
The police witnesses gave their evidence. They included the foresters who had drawn up the coupe plans and authorised the logging. None of them had considered the Heritage Rivers Act, and none of them had looked at the map which Parliament had said should prevail over any other logging rules.
It was clear that the prosecution could not prove that the logging was lawful, and after three days of hearing (extending into early 1998) the case was thrown out.
The Kennett government was embarrassed by the outcome. It dropped the charges against all those who were charged, and suspended logging in East Gippsland for the remainder of the summer - the court ruling meant that the East Gippsland Forest Management Plan was "void" in its entirety, and they had to start again.
The government introduced legislation to retrospectively validate the logging plans, and to amend the strong protection in the Heritage Rivers Act. It reduced the buffer zone from 200 metres to 100 metres. The government also introduced legislation making it an offence to enter a "forest operation zone" - large areas where logging might or might not occur.
They also appealed to the Supreme Court against the dismissal of the charge against Bob Brown.
The Supreme Court hearing came on late in 1998. I was opposed by Susan Crennan QC, now a High Court Justice. Justice Kellam reserved his decision, and we came back on 23rd October (which happened to be my wife Sally's birthday) to hear the result.
Justice Kellam found that the prosecution argument faced "insuperable obstacles" and threw out the appeal. He confirmed that the charge against Bob Brown remained dismissed, and ordered costs against the prosecution.
It took many more years to save Goolengook, but that night, at least, we all went out to a restaurant in Southbank and celebrated!
External Links
Posted by Brian Walters at 22:39