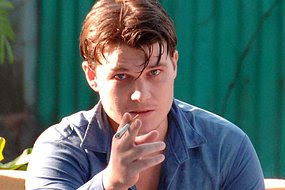 Scott Rush
On 17 April 2005, Queenslander Scott Rush was arrested at Nguraj Rai Airport in Bali with 1.8 kilograms of heroin taped to his legs. He had been about to fly to Australia with the drug. He was 19 years old, and on his first trip overseas.

Rush was clearly no "Mr Big". He was a mere novice drug mule, at the bottom of the drug-trafficking food chain. He had a history of drug abuse in Australia since the age of 15 and had the sort of criminal record fairly typical for those with a drug habit.
Indonesian police arrested several other young people over the next couple of days. Together they came to be known as "the Bali nine".
On 13 February 2006, Scott Rush was sentenced to life imprisonment. Prosecutors appealed to the Supreme Court, and on 6 September that year his sentence was set aside, and a new sentence imposed: death by firing squad.
So far several other members of the Bali nine have had their death sentences commuted. However, Myuran Sukumaran (from New South Wales) and Andrew Chan (also from New South Wales) were sentenced to death also, and their sentences have been upheld on appeal. Last month (August 2010) Scott Rush (who was not on any view the ringleader of this group) launched his final appeal and was granted a judicial review. He is now awaiting an outcome of that process. He continues to face the real risk of execution.
Here in Australia, the death penalty has long been abolished. (It has never been thought appropriate for offences like drug trafficking anyway.) As a matter of fundamental human rights, we regard the state as not having the entitlement to take the life of a citizen.
To give further force to this, there is an important qualification on our dealings with overseas countries in relation to criminal matters: no such co-operation should be afforded where it might lead to the death penalty being imposed. There are two statutes which give effect to this: under section 22(3)(c) of the Extradition Act 1988, the Attorney General may not surrender a person to another country where the penalty of death might be imposed unless satisfied, on the basis of an undertaking from that country, that the sentence will not be imposed or carried out.
There is a similar provision under s 8 of the Mutual Assistance in Criminal Matters Act 1987.
It is a serious matter for officers of the police to undermine this important public policy, but that is exactly what the Australian Federal Police did in relation to the Bali Nine. Scott's parents tipped the AFP off about the proposed trip, and asked the police to intercept him at the airport and prevent him going on the trip. The police could have prevented his departure. Alternatively they could have waited until he returned and arrested him then - along with the others in the group. Instead, the AFP provided Indonesian police with the names and passport numbers of all those involved, intending that the Indonesians would arrest them and well knowing that they faced a real risk of execution at the hands of Indonesian authorities.
The conduct of the AFP was gravely immoral. It knowingly placed the life of Australians at risk.
Scott Rush's mother said that she felt "very let down by our Australian Federal Police", but the AFP said publicly in response:

Even with the aid of hindsight, should the same set of circumstances present themselves again with another syndicate or other people, we would do exactly the same thing.

In South Africa, in the Mohamed Case, the Constitutional Court held that it was unlawful for authorities to co-operate in the deportation of a fugitive to a foreign country where he would face a trial for his life. This was held to be "inconsistent with the government's obligation to protect the life of everyone in South Africa, and it ignores the commitment implicit in the Constitution that South Africa will not be party to the imposition of cruel, inhuman and degrading punishment."
The same rules should have applied to the conduct of Australian police - who administer the law on our behalf - in the Bali Nine case.
The resources of the Australian Federal Police should not be used to expose Australian citizens to the death penalty. A simple arrangement requiring an undertaking that the death penalty would not be imposed before exchange of information would prevent this situation occurring in future.
There is still hope that Scott Rush, Myuran Sukumaran and Andrew Chan will not be executed. Whatever happens, we now know that further control over the conduct of Australian Federal Police in their overseas dealings is overdue.
External Links
Posted by Brian Walters at 02:30